Currently billeted with my 90 year-old father at the coast, I was out yesterday afternoon and returning to base when I was called from his house by She Who Must Be Obeyed (‘SWMBO’). Where was I? As it happens, I was just passing the church – less than half a mile away and counting. Well, could I please hurry up, because by my father just had a bad fall …

When I reached the house he was sitting on the stairs, his head bowed with the back of his head bloodied from a cut that he had suffered when over-balancing as he made his way from the TV room to the kitchen. He was reported to be feeling a little dizzy – he was certainly in shock from the experience, so we moved him to a straight-backed armchair and got him settled.

The wound had bloodied a tea towel that had been administered to the back of his head and SWMBO announced she thought it needed stitches. What to do next? The options seemed to be either take him to A & E at the hospital six miles away or call ‘111’ and try to get somebody to come out to see him.

I made an executive decision – I’d take him to hospital.

Having set off with him in the passenger seat beside me, he immediately said (as I had anticipated he might, based upon – from his view – unsatisfactory delays and outcomes at the hospital previously) that under no circumstances was he going to spend the night in hospital, in fact he’d far rather be taken to the local medical clinic three miles in a different direction. Although it was probably closed for the day (it was by now 6.40pm) I changed course to go to the local clinic and radio’d SWMBO at the house to advise of the slight change of plan.

As suspected, said clinic was shut (it closes at 6.30pm on weekdays), so the new Plan B was to return to the house and call ‘111’ to see if we could entice a paramedic to come out.

For this purpose I pulled my car up facing the road in the driveway and rang ‘111’ on my mobile – this on the basis that, if they dispatched someone to us, we’d retire to the house and if not (and if they suggested this) then we’d proceed straight to the hospital.

When you call ‘111’ (as I understand it) the operator at their end is not medically qualified but sticks to a set ‘Q & A’ form that he or she fills in, based on the caller’s answers, then puts that in front of a medic who then assesses the seriousness and priority of the situation.

Doing this exercise took about twenty minutes, at the conclusion of which we were told we’d be rung back by a medic, so we took this opportunity to go back in the house and wait by the land line in the TV room.

Within five minutes a chap came on the line and talked himself through what had happened with us again before saying he was sending a ‘non-emergency’ ambulance to the house to assess my father’s wound.

Ninety minutes later it arrived, staffed by three friendly lady paramedics. They did their assessments, announced the wound did need stitching and rang round to see if there was a ‘specialist stitcher’ paramedic in the vicinity. There wasn’t.

Change of plan – they’d take my father to the hospital (me following in my car) so he could be stitched – or glued – there.

That is what happened. Having parked up, I joined up with the crew as they parked my father (in a wheelchair) in the ‘minor injuries’ unit of the hospital’s A & E.

The remainder of my tale is of waiting and comparative inaction.

After ten minutes or so a nurse came to do my father ‘obs’ (blood pressure etc.). 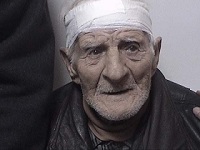 By the time half an hour had gone by my father, an impatient man because of both his age and previous experience with hospitals, was beginning to get agitated. “All I need is a couple of stitches, or whatever, and then I can go home … what’s the bloody problem?”

I did my best in difficult circumstances to keep him calm but after another half an hour decided to enlist the helped of a middle-aged nurse who seemed in some position of importance. He told her he was fed up waiting and was minded to go home. She said she couldn’t prevent him from discharging himself, but strongly advised him to stay and be seen by a doctor and stitched up. When pressed, she said he was now sixth in line to be seen.

An hour later – now two hours after the ambulance paramedics has deposited my father in the waiting area of the ‘minor injuries’ unit, during which he had seen no doctor at all, still less had his wound stitched and was now seething – I walked up to the desk and announced that my father and I were discharging ourselves and going home.

I know that the NHS is currently under huge strain. Yesterday the staff were all clearly full of good intentions etc. but frankly – by this time – I was in tune with my parent’s frustration. To keep a 90 year old man with a gash in the back of his head requiring stitches waiting for two hours … whilst a succession of others of all ages sizes and persuasions were flowing through the unit at varying speeds, is just unacceptable. Or at least was last night.