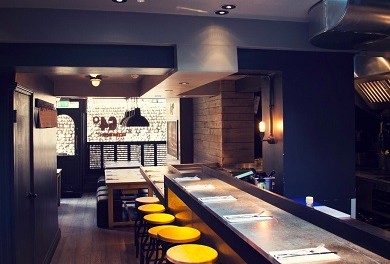 Yesterday in Brighton centre, amongst a myriad of young European adolescent schoolchildren not intimidated by Brexit and some enjoying the first rites of sexual encounter, I came across a forlorn, pitiable feature. It was none other than our very own Bob Tickler. He has suffered in the last fortnight a terrible run of breakages and breakdowns – his glasses, watch, telly and barbecue, on top of which yesterday his car would not start and when he attempted to call the breakdown service there was no screen on his mobile. To make matters worse his life support system – the admirable Polly – was hors de combat with a burned foot. I was going to suggest his beloved English’s but he goes there regularly so we repaired to 64 Degrees.

I have not been there this year and I always like to check out a restaurant I rate highly. I was not disappointed. We sat at the bar from where we could watch the preparation of the dishes in front of us which I always enjoy. You have a window on how a busy kitchen operates. Chefs are hard-working meeting endless deadlines to get the plates out. The sauces are prepared in advance. 64 Degrees works as they have no more than 12 dishes all intricate and varied in flavour. We had scallops, lamb belly and ox tongue with a aubergine in tomato coulis. Each to die for. With a couple of glasses of Gruner Velner and Negroni inside him Bob was soon his old cheery self though not optimistic about the pound and financial markets post-Brexit. The flip side of 64 Degrees is that it’s very small with only 3 tables and about 12 at the bar so it’s cramped and not comfy. It’s ideal for a quick lunch on the move. Significantly the diners to our left and right were praiseworthy of the cuisine. At £60 per head it’s not cheap but for me it serves the best food in Brighton.

We fought our way back to the mobile repair shop through endless caterpillar files of ambling young students, some were holding hands which reminded me of my first and cumbersome months romantic rites as a 14 year old at summer school in Herne Bay. A couple of years after I had my first proper boyfriend and after 5 months not only was I still a virgin but so was Robbie!!!!

After graduating at RADA but finding no roles Daphne went into magazine journalism with Good Housekeeping. Widely recognised as one of the country's leading restaurant and hotel reviewers, particularly by herself, Daphne is the author of "Bedded and Breakfasted", a light hearted chick novel and Grand Hotels DC: the Daffers Dictionary. Daphne lives in West London and is married to an investment banker Oliver. They have 2 boys Humphrey and Tarquin. More Posts