Yesterday afternoon I travelled up the M40 to visit my daughter Grace for only the second time since the end of February, almost three weeks before the UK’s lockdown began, when she had announced she was pregnant.

A combination of the lockdown rules and a natural desire on her part to avoid risks had prevented us conversing other than via phone in the meantime.

My first suggestion that I might pitch up and ‘socially distance’ from her in her garden was summarily rejected on the grounds that I’d recently had neighbours arrange similar with me at home and therefore I was being placed (by her) under another fortnight’s self-isolation incarceration before I would be allowed to go anywhere near her!

Anyway yesterday’s expedition – my second of the type – went with barely a hitch.

I chose to nip up to Hangar Lane to join the A40 as my outward route – thereby avoiding the M25 – which brought about two noteworthy observations.

The first was that at about 4.30pm the temperature outside my car (according to its computer) reached 31 degrees Centigrade at some point between Ealing and Hangar Lane.

The second was that – even before Boris had performed his latest set piece to the nation about how and to what extent we living in England were going to be further exiting the lockdown on 4th July – and judging solely by the amount of traffic upon the roads of west London yesterday, never mind the mountain of praise the politicians routinely chuck in our direction for our “magnificent and admirable response” to the restrictions imposed upon us because of the coronavirus pandemic, to all intents and purposes the great British public seems to have given up any pretence of observing the lockdown at least ten days ago.

The highways were heaving with traffic.

I could only assume that two separate electronic roadside noticeboards that I spotted bearing the command “Essential journeys only” had either been left ‘on’ by mistake or, alternatively, were being displayed as some sort of Governmental satirical/ironic dig at the lemming-like herd of bumper-to-bumper vehicles (that I was confined within) crawled its way northwards.

Apart from the great joys of seeing Grace and her husband in the flesh and our catch-up chat, a good deal of our conversation was about how much change in our daily lives would result from Boris’s latest partial releasing of the metaphorical lock gates.

The consensus was “not much”. 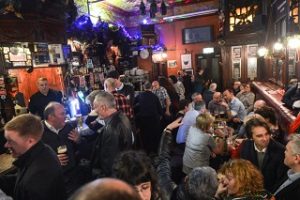 We agreed that – for all the publicans’ proud boasts of having already taken on board all the Government’s restrictions and adapted their premises suitably for the purpose – the undeniable likelihood was that entering a boozer would inevitably mean exposing oneself to the Great Unwashed just as we used to do in the good old days of pre-lockdown.

Which, as a matter of personal choice, we were not inclined to do.

And so this morning, as another promised day of unrelenting sunshine dawns, I shall be operating under my decades-long everyday normality which – as it happens – was little different to life under lockdown anyway.