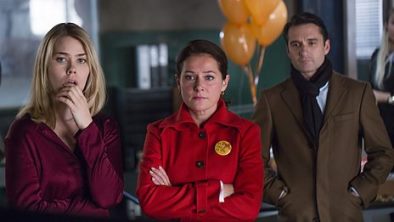 One of the most significant elements of the third series of  Borgen is the failure of Brtish television to produce any thing as good . After all we have the actors , scriptwriters and directors but remained locked in a time warp between soaps and costume dramas with the odd psychotic crime series ona Sunday night.

The back cloth to Borgen is political. The prime minster Birgitte Nyyborg (Sidse Babett Knudsen) is making a come back and this is blocked by the leader of the moderate party she once led. The media is well represented though the blonde actress Birgitte Hjort Sorensen playing press advisor Katrine Fonsmark whilst attractive over acts as many do normally in soaps who have not had the right training .The charismatic Birgitte Nyborg flies the flag for middle age achievement and sexuality with her warm smile , glossy hair and designer outfits which masks a shrewd and calculating nous. Katrine Fonsmark trying to balance a hectic lifestyle with bring up her little boy in which her mother plays a lead role . One of the successes of Borgen is the examination of female issues, the problems experienced by women in the man’s world of politics. Another is the media . the news chief of the tv station is under pressure as realty tv is cheaper and gets better ratings. there is clearly a small pool of actors in Denmark as familiar faces in  the Killing appear . TV anchorman  Soren Malling was excellent too in A hijacking, Danish film production of a Somali hijacking which I preferred to Captain Phillips.

At two hours the first episode was as long as a film. I stopped at the end of the hour, catching the second episode  on I player. Nonetheless its good to have it back and maybe it might inspire our drama heads to roll,back the frontiers.

After cutting her journalistic teeth in Boston USA, Bernadette met and married an Englishman, whom she followed back to London. Two decades and three children later, they divorced. She now occupies herself as a freelance writer (credits include television soaps and radio plays) and occasional amateur gardener. More Posts