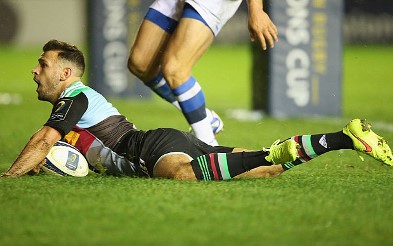 Harlequins duly beat Castres in the first-ever Rugby Champions Cup match at the Stoop last night by a margin of 25-9, but sporting score-lines don’t always tell the full story.

Given ‘nerves’ … the inbuilt intensity of the new tournament and the indifferent form of both teams in their domestic leagues this term [to which I referred in an earlier piece this week] … it was perhaps too much to hope for a fireworks-fest of attacking rugby in a wet and slippery south-west London. This was a full-on physical contest in which the packs played a lasting and significant part. A solitary Quins try scored by Danny Care midway through the second half was the only respite from what otherwise boiled down to a kicking contest between the hosts’ Nick Evans and the visitors’ Rory Kockott.

When you’re talking sporting talent, at the very top level there’s a consistent degree to which the very best players have the ability to raise their game when either the chips are down and/or the importance of the occasion demands it. By his own standards Quins’ Evans has been performing below par this season. However, last night he was imperious in his playmaking decisions and execution – seven successful kicks from seven attempts and a wonderful personal ‘chip and recovery’ to slice through the Castres midfield defence, followed by a perfect diagonal kick to give his scrum half partner the sniff of a chance (all he required) to gather and score in a foot race, accounted for all of Quins’ points.

The boys and I gathered at 6.00pm, as arranged, in the Sussex Arms for a couple of pre-match pints of ale. The initial atmosphere was somewhat subdued – the wife of a drinking buddy known to us all had succumbed to cancer this week, the day after taking up residence in her hospice – but things gradually relaxed as the rugby chat took over. The Stoop crowd, about 14,000 (a thousand shy of full house – not bad for a Friday night), was buoyant and noisy, no doubt feeding off the hope that a new competition might bring a new spring to our fortunes.

At half-time the score was 3-3. By then there had been a lot of huffing and puffing, but the game was still to be won by the team that could push on, or possibly wanted it most. It may not surprise my readers that, thanks to the collective beer intake, those in my party had need of using the ‘facilities’, which expedition (as usual at rugby matches) used up the entirety of the half-time break.

In summary then: not a great night by any stretch of the imagination, but a welcome first European victory of the season for Quins. Ironically, Castres came to play and never gave up, but inevitably they’ll get unjustly tarred with the stereotypical “French teams don’t travel” tag.

A recently-retired actuary, the long-suffering Derek has been a Quins fan for the best part of three decades. More Posts