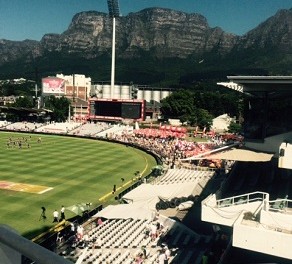 In the great NR debate on attendance v home watching the quality of the stadium/venue plays a role and few are as beautiful as Newlands the scene of the second test. It’s aspected by a mountian range that gives as thrilling a back drop as a Western and by the sea. The stands are around the square, and no modern bowl, but  varying in construction and colour. Between the stands are the famous Oak trees. The only blots are the vats of the Castle brewery and railway lines on the mountain side. I cannot think of a more picturesque Test ground.

Cape Town with the Green Point Stadium has superceded Joburg, Durban and Port Elizabeth as the country’s sporting epicentre. As Bob said sport is huge in South Africa but it’s the one area where the performance is disappointing . In soccer, where reports in the media and the tv coverage of the Premier League dominate the local game, Bafana  Bafana have yet to make an impression in the African or World Cup; in rugby they have had one World  Cup victory but fared no better than  Argentina in the last World Cup; Albert Pistorius is famous for the wrong reasons. For a period in cricket they were the best in the world but, like England ascending cricketing Olympus, their descent down it was rather rapid.

Although I had press box accreditation I went to Bob Tickler’s box in the Oaks Stand. He had clearly hand-picked the lovely hostesses. Castle beer in hand, I decided this was as good as vantage point as the press box to watch the proceedings. Bob was in cracking form: Panama hat with MCC band he was regaling his airplane encounter now well embellished “… so when this Von Tirpitz asked me how did I learn such good German I told him ” ich bin a bin-liner “

Those at home and not enjoying the heat and the exchange rate, would have had a better view than me. Indeed on various referrals I went to the tv in the box to see their analysis. England wobbled either side of tea, South Africa – especially Chris Morris – were impressive in the field but England won the day.  Amla’s captaincy came under criticism once again for not offering the second new ball to Morkel and a 8-2 off /leg field which needed tighter bowling  If Stokes and Bairstow, Moeen Ali and Stuart Broad can add 100 runs then the lead should be unassailable. The pitch has a bit of bounce but I cannot see any future problems .

As for England, their first four batsmen’s looked like making big scores but did not do so. Just when the momentum was switching to South Africa with two dismissals in two balls, Stokes and Bairstow led the recovery with some expansive hitting and rapid run accumulation .

I enjoyed talking to Sussex-ex Garth Le Roux in the box. Though now more rotund than in his playing days he knows his cricket and I got his autograph for Ivan Conway. Such is Bob’s pulling power than Michael  Vaughan and Graham Gooch made appearances too. It was to their credit that though they mixed easily they spent most time with an elderly Gloucestershire supporter in a wheelchair. After 8 hours I was ready to return, shower and go to Daffers’ recommended Baia. I will leave her to describe that though I will say the sea food was delicious.

Douglas Heath began his lifelong love affair with cricket as an 8 year-old schoolboy playing OWZAT? Whilst listening to a 160s Ashes series on the radio. He later became half-decent at doing John Arlott impressions and is a member of Middlesex County Cricket Club. He holds no truck at all with the T20 version on the game. More Posts