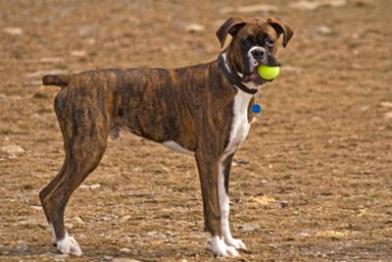 Dogs make great companions. When I was a young kid, my parents had two boxers in succession – tails docked because was the fashion in those days and I still feel that since its banning somehow a boxer with a full tail looks odd – and they make great family pets. Partly. For kids they were fantastic. Smooth-haired, they didn’t have that doggy smell. They were loyal, fun and gentle. The one thing dogs do not like is having people blow in their ears. But you could have a boxer with two or three tiny babies lollying all over it, pushing here, pulling there, lifting its ear and blowing into it … and he’d just lie there, with a faint hint of resignation and eye-brow raised boredom on his face.

Back then, of course, rugby and soccer balls had laces. When they were worked loose, our boxers were enthusiastic participants in our garden matches, running away with the ball and deftly evading all attempts to tackle or catch them. However, if a baby was left alone in a pram, the dog would sit beside it, guarding and minding it. That was his ‘job’ – he protected the family and in return he got fed, taken for walks, and petted. What more would any dog – indeed any man – desire?

Actually, going for walks with a boxer was a bit of an issue. Permanently in protection mode, all humans and particularly all dogs we might meet were potential threats. Boxers strain on the leash, wishing to go ahead and scout, seeking out potential trouble. As often as not, they caused it themselves. Confrontation, a bout of barking – in extreme cases a dog-fight – all were always potential happenings on a boxer walk. 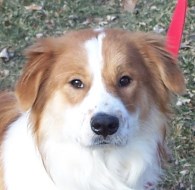 As young parents, my first wife and I acquired a collie-cross mongrel puppy. Highly intelligent, he was a quite different proposition – quiet, well-mannered, affectionate and not in the slightest aggressive to anyone. Going for a walk was a novel experience – no confrontations with other dogs, happy to approach humans or be approached by them, easy going and just basically perfect. The only thing that he would not do – and which boxers always did – was chase a ball. He couldn’t see the point, or had better things to do.

When my wife died and I moved to a block of flats where dogs were not allowed, our collie-cross was willingly taken on by my parents – we saw him every week when we visited and we looked after him when they went away. My parents were extremely fond of him and he of them. He was well known in their coastal village to the extent that other villagers used to ask to take him for walks and pop round to see him. He was certainly a bit of a character.

A lady I know has an obsession for dogs. She loves them more than humans and – if you like – they are her babies. Frankly, I think this is a bit over-the-top. For me, dogs are great, but they’re just dogs. For this lady, however, they are human beings in fur. She projects onto them intelligent thoughts and expressions, talks to them as if they are people – frankly, it all strikes me as bit unhealthy and weird.

Don’t get me wrong, if I came back reincarnated as a pug, I’d love to be owned by her. No canine need is too much trouble.

One characteristic of dogs in that they live just 14 or 15 years and that’s if they’re lucky. It is said that one human year equates to seven dog ones. In short, they don’t live very long which – as I see it – is both a fact of life and a potential advantage. Every twelve years or so, you have the sadness of losing one and then a choice – i.e. whether to have another one, or not. If your lifestyle has changed, or now you decide that the commitment of having a dog is not something you wish to take on again, you don’t. It’s as simple as that.

If you think about it, it might be better if human marital relationships had similar built-in life-expectancies.

The lady I referred to previously has always owned dogs. A decade ago she took on two flat-coat retrievers – a girl two and a half years older than the boy. They were inseparable – actually, in addition, they and their owner were inseparable. Until last November, when the girl eventually had to be put down at the amazing age of 12 – four more years than the average life expectancy of a flat-coat.

I thought the lady would be hysterical when the big decisions had to be made and then enter a Queen Victoria-length period of mourning (after Prince Albert died). To an extent she was and did, but I was also very impressed. When the time came that there was going to be no getting better for the female flat-coat, indeed she needed to put her out of her misery, the lady did not flinch from the decision. She was distraught, totally bereft, but she knew what had to be done. It was the ultimate act of love between her and the pooch, if you like. 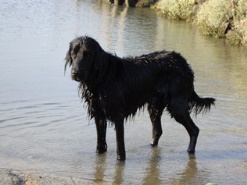 Eight days ago – less than a year later – the younger boy dog (now 10 and a half) had to have a large growth and his spleen removed in a three hour operation. Tests are now being undertaken and if the tumour was benign, he probably has a year or so of life left. If the tumour is malignant – there’s no point in prolonging things, he has to be put down.

Last Thursday, we came to the coast, hopefully for him to recuperate and relax. Initially he perked up at being here. He looks a sorry sight, with his tummy and sides completely shaved, plus also patches on his forearms, in which they inserted the drips. He lacks energy. He is not allowed to go for walks, or get excited or swim – his favourite pastime and what the breed is intended for.

Yesterday (Friday) he took a turn for the worse. He could barely move. His eyes were watery. He began breathing nineteen-to-the-dozen, panting … just lay down as if in discomfort and running a fever, looking sorry for himself – just like I do in similar circumstances. I kept petting him and making soothing noises, repeating his name – I couldn’t think of what else to do.

Meanwhile his owner grew increasingly concerned. Calls to his vet in London were made and we rushed him to a local veterinary surgery. The staff and the vet were excellent in their attention and helpfulness. The verdict? He’s either just running a serious fever and will get better with antibiotics – or he may have internal bleeding. The only way to check the latter would involve another major operation – so, in his circumstances, that’s out of the question. When you add that to the fact the biopsy tests results are now 48 hours overdue, on a percentage chance basis, the odds may be against the poor chap surviving much longer.

As I said, dogs are just dogs. But right now I’m kinda rooting for the guy – and this time it’s personal.

Douglas Heath began his lifelong love affair with cricket as an 8 year-old schoolboy playing OWZAT? Whilst listening to a 160s Ashes series on the radio. He later became half-decent at doing John Arlott impressions and is a member of Middlesex County Cricket Club. He holds no truck at all with the T20 version on the game. More Posts