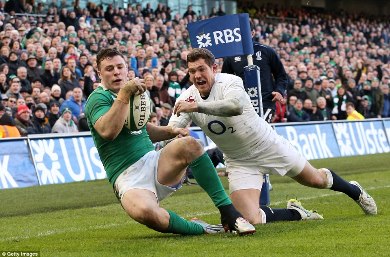 It all seems so obvious now, but Ireland’s convincing 19-9 rugby union victory over England in Dublin yesterday, of which I witnessed only the second half (live on television) due to a family luncheon commitment, defied my adrenalin-fuelled rush of anticipatory uncertainty last week when considering the contest in prospect.

I guess that’s one of the joys of huge sporting occasions.

There’s an old locker room saying that ‘class in permanent, form is temporary’ but only the first of those statements really counts.

A boyfriend of one of my nieces is a rugby industry insider. At our social function yesterday a group of us asked his prediction of the outcome of the match and his response was telling. He simply said “Joe Schmidt [the New Zealander who is Ireland head coach] is by some margin the best coach currently operating in the North Hemisphere …”, leaving unsaid – but inescapable – his view that in comparison Stuart Lancaster and his group of England elite coaches were clearly inferior.

In team games it is axiomatic that there are various factors that come into play on any given day. Weather, home advantage, inspirational leadership, team spirit and intensity – or lack of them – can all contribute to success in any given match. As can matters of individual player and coach quality.

Even Joe Schmidt or Jose Mourinho could not make silk purses out of sow’s ears. By the same token, the team boasting superior (man-for-man) players does not always win and that can be due to the quality of their coaching.

The big question hanging over the Stuart Lancaster regime from its outset has been how well England will fare in the 2015 Rugby World Cup. Six Nations, summer tours to the Southern Hemisphere, autumn internationals and the countries’ world ranking table – they each count for something, of course – but in terms of four-year cycles, international rugby coaching is ultimately defined by the World Cups.

There may be something parallel happening when one considers side by side the English rugby and cricket teams, in terms of player selections and the way the teams are coached.

The naysayers are questioning Peter Moores’ right to remain as England cricket coach given his team’s results and perhaps similar should be asked of Stuart Lancaster, despite his undoubted attention to detail and hard work. When it comes to elite sport good  intentions are clearly not enough on their own.

As a punter, sometimes I have been baffled by Stuart Lancaster’s player selections, both of individuals and position. In his second coming, Mike Brown – who is a full back if he is anything – was picked for a complete Six Nations season and other matches as a wing threequarter, with mixed results.

Why was this? I call in evidence the fact that, the instant he was picked at 15 (the following season), Brown became the autumn internationals and then Six Nations player of the year.

This Six Nations, Lancaster has belatedly added Harlequins’ Number 8 Nick Easter to his Six Nations squad – a justified call, given the veteran’s consistent excellence in the Premiership. Easter has since come off the sub’s bench in both the Italy and Ireland games – scored a try in the former and made a distinct difference in the latter – but playing as a replacement lock each time.

If you are going to pick a 36-year-old in your squad at all, why not play him in his proper position?

The idea – if this is the logic behind these decisions – that you should get your best 15 players on the park, even if that has to be ‘out of position’, is naïve in the extreme.

Let’s be honest, there isn’t a rugby player alive who would turn down the opportunity to play for their country, irrespective of the position, but that’s not the point. International rugby is difficult and stressful enough without the additional burden of having to play other than in your true role.

Yesterday I was struck by how outplayed some of the England players were by their opposite numbers on the Irish team. It doesn’t help if – as is the case, in my view – you are picking the wrong people in certain positions, or indeed picking the right people but asking them to play in the wrong positions! 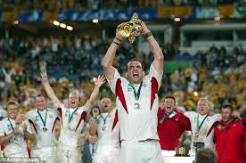 Yesterday was a hugely disappointing result for England. It will knock their confidence and set them back. The situation is not terminal but it is getting critical.

At this stage of the 2003 campaign Martin Johnson’s England had been winning Six Nations titles and beating Southern Hemisphere opposition regularly for eighteen months.

Almost four years into into its RWC cycle, the current England team is still well below that sort of form or delivery potential.