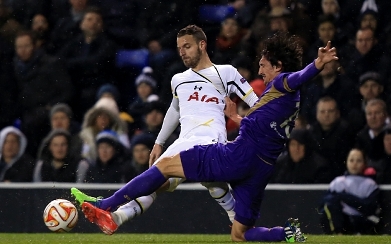 I was happy to be back in London on a cold windy night warmed by a pleasing performance bŷ the Viola at White Hart Lane. My father used to speak of the Spurs double team at a time when Fiorentina were Serie A second or champions for 5 seasons and also one of the best teams in Europe. Indeed Fiorentina were the first team to reach the final in 1956 of the old European Cup and to win a trophy the Cup Winners Cup beating Glasgow Rangers in 1961. Spurs beat Atletico Madrid to be the first British team to win a European trophy in the same competition. It was a night of nostalgia as Inter played Celtic, the two team contesting the 1967 Final, and the first British victory in the European Cup.

Spurs dominated the first 30 minutes with Andros Townsend giving Pasqual a difficult time. However we began to impose ourselves and equalised. I like to think we were a good advert for Italian football with our slick passing and both teams contributed to an exciting game with a fast tempo. Joaquín at 33 played well but it was an all round team performance. I have a good feeling that we will finish the job in Florence.

The game was a sell-out and the Fiorentina fans were in loud voice. I was so proud that on a wet February midweek night we took up all our tickets and it was our fans who were singing the loudest by the end. It was a great European night rivalling that when we beat Arsenal at Wembley.

It was good to meet up with Rex Mitchell and Tom Hollingoworth for a meal. Sadly Alan Tanner could not make it up from Worthing he called afterwards furious with the analysis of Owen Hargreaves on BT Sport who was critical of our defence and predicted an easy Spurs victory. Aside from Pasqual the defence held firm and Spurs did not have that many chances. I told John Pargiter to lay (bet against) Spurs and after Fiorentina went a goal down to increase that bet. He took my advice and was happy too at the end.

I hate to say it but I can see Juventus doing well in the Champions League. They are 7 points clear in Serie A so have no worries there and can concentrate on the European competition. Fiorentina however are pressing for a Champions League berth and will have to balance our resources carefully. Inter, Roma. Napoli are all in the competition as are Spurs and Liverpool as we approach the business end. However with a League Cup final two days after the game in Florence I don’t think as you say Spurs will be as “up for it ” as Fiorentina.

The son of a leading Florentine art dealer, Stefano initially worked in the Uffizi Gallery. He went into journalism and soon became a popular stringer writing on Tuscan wines, art and football. Stefano lives with his partner Umberto in the Santa Croce quarter of Florence. A dedicated supporter of AC Fiorentina his elegant articles on the Viola as well as the Serie A have earned him an appreciative global audience. More Posts