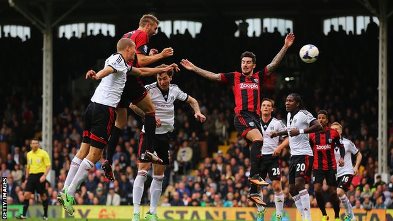 For all the forest running and medicine balls by way of training, the simple immutable fact remains that – once over the white line – there is little that can be done to change a result. Fulham’s keeper Stekelenberg had a good gane but right at the end fumbled a shot and, ironies of ironies  given the 1966 World Cup Final v West Germany, it was over the line as confirmed by Hawk Eye.

I  liked Magath’s post match comments. No public criticism and a persistent faith that Fulham will stay up. I wish I could share  this optimism: we probably need 15 points. Cardiff away, Hull, Newcastle, Norwich and Crystal Palace at home fall into winnable category, on the road we might get points at Stoke, Villa and Everton, Spurs and Manchester City away, Chelsea at home  nul points – as Stuart Hall  used to say in Jeux Sans Frontieres.  However these things rarely go to form. We might get a draw against Chelsea next week , feel buoyant and crucially lose at  Cardiff.  My fear is that a goal difference 14 worse than Palace could be  fatal by the time we meet them on the last game of the season.

There was a fine article in the Mail on Sunday by Patrick Collins, referring to Fulham’s eccentricity defined by its old telegram address Fulhamish.  His theme is that the ruthlessness of the culls is not Fulhamish. Winning the World Cup,was not the only though most important event of the Sixties. Fulham in circumstances such as these produced the Great Escape. We did so by team spirit, defined as much by Bobby Keetch at the heart of a stout rearguard action, as the legendary Johnny  Haynes.  I just don’t see either here.

2 Comments on The Tanner Report