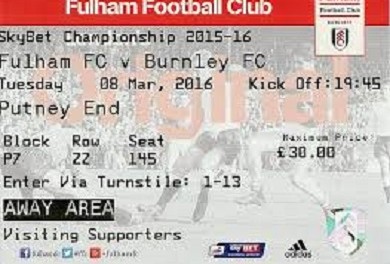 Yesterday I received the renewal forms for my season ticket. I was informed we had our “share of high and lows”. I can’t recall too many highs except for victories over QPR . As for lows, well we are one place outside the relegation zone and but for the goals of Dembele and McCormack could have been within it. We have conceded 78 goals to date, had three head coaches, and  numerous tactical and team selections. Even old Fulham felt disenfranchised as few could get tickets for the George Cohen dinner. In our Premier pomp we only had 14,000 season ticket holders and next year I predict it will be half that.

We supporters were praised in the letter for our loyal support  but at Brentford last week the  chant in unison was ” You’re not fit to wear the shirt” as it was a dreadful season.

My memory takes me back to the summer of 1995 and the Bell pub at Walkerswick. I was having a drink with Fulham fanatic Dominic Guard and he had to persuade me to continue my support. We had very nearly dropped out of the league and I could see no hope. The tenure of Craven Cottage was distinctly shaky. The situation was very much worse than now. Indeed we would have only dreamed of Championship football let alone 13 seasons in the Premier, a Europa league final, a secure all-seater Craven Cottage and the likes of Van Der Sar, Louis Saha, Chris Coleman, Steed Malbranque, Moussa Dembele, Steve Finnan, and Clint Dempsey. They were fit to wear the shirt.

Of course I will renew though. not for any of the reasons suggested by the spinners in the Club’s communication department but because after 48 years you cannot give up your team even though I have never felt more distant from it. I recall Mohammed al Fayed exhorting the new owner to keep supporters on board. Sadly he and his off and on the field team failed to do so.