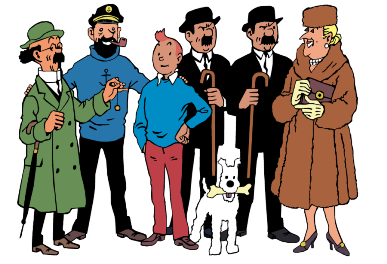 I suspect that whilst loathing the man, there was a grudging respect for the tagged terrorist who escaped disguised as a woman. However those of us and know and love Herge’s Tintin know this was achieved by Captain Haddock in the Crab with the Golden Claws.

Growing up with Tintin was to enter a rich world of characters and civilisations but looking back on it it prepared me for the world. Tintin was on the moon 13 years befor Armstrong in 1956 in Explorers on the Moon. The conflict in the Balkans was predicted in the Calculus Affair and King Ottakar’s Sceptre . The Aztec civilisation was examined in the Prisoners of the Sun, Eastern Mysticism in Tintin inTibet. Bianca Castafiore the Milanese Nightingale singing the jewel song from Faust my first sampling of opera

It did not end there either. From the affable Mr Cutts the butcher to the lazy builder Bolt forever offering excuses for not repairing a step at Marlinspike to the ever cheerful but tiresome Jolyon Wagg and his barber uncle Anatole there were a glittering array of characters. My favourite was Captain Haddock, partial to a tipple and unswervingly loyal. I still laugh at his sleepless night when the evil mate Allen asks him if he will sleep with his beard under or over the sheet. Or when he chides Tintin patronisingly for not realising logs on a South American river were sleeping crocodiles whilst he’s sitting on one smoking his pipe.

Strangely enough I always found Tintin anodyne and Snowy irritating. He seemed to be the one colourless character amongst the villains, emirs and South American dictators.

Herge’s reputation suffered in two respects. He stayed on in occupied Belgium working for Le Soir which had strong Nazi sympathies. He believed in the New Order . Earlier books like Tintin in Congo are deemed fascist and colonial in the depiction of blacks. Nonetheless Tintin still has a vast army of fans and certainly not all young, Charles Moore the ex editor of the Spectator is one.

Herge was also a brilliant illustrator . He really invented the comic in its present form and in that game of nominating 10 famous Belgians he should be number one.

A former literary agent with three published novels of her own, Melanie retains her life-long love of the written word and recently mastered the Kindle. She is currently writing a historical novel set in 17th Century Britain and Holland. More Posts