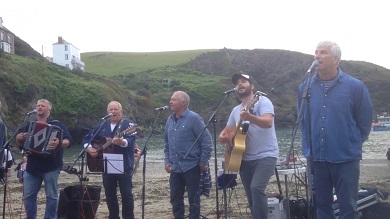 I cannot be totally sure but I believe I heard the folk group A Fisherman’s Friend sing their sea shanties at the little quayside of Fowey South Cornwall some 6 years ago.

I say I cannot be sure as, although I videoed the performance, it does not entirely marry with those of the folk group based in Port Isaac and now the subject of a feature film to come out in the cinemas this Friday.

The group I watched were all dressed in pirate costume but the A Fisherman’s Friend combo were in civvies and seemed older. No matter. Both are preserving the great traditions of folk lore music that influenced classical composers like Brahms, Rafe Vaughn Williams and modern day rock groups.

They reflect Cornwall’s fierce independent spirit perhaps caused by it being the only English county with one neighbour Devon, whose inhabitants they hate.

A friend of mine with a home there observed you need to be five generations Cornish to be accepted as second home Londoners are similarly loathed, as is the EU for permitting the raids on their fisheries notwithstanding their huge subsidies conferred.

It’s a county that can claim as residents three of our most successful writers – Agatha Christie, Daphne du Maurier and John le Carre – as well as two esteemed schools of art, the St Ives and Newlyn.

For all the coldness of reception a year without visiting Cornwall is not a complete year for me.

Hearing members of A Fisherman’s Friend on radio 4 ‘s Front Row I was struck by the similarity to the Buena Vista Social Club, itself the subject of famous film by Wim Wenders.

These were old Cuban boys, master craftsmen of jazz suddenly discovered in a Havana club and seemingly indifferent to their success. They played the Lincoln Center.

A Fishermen’s Friend have played at Glastonbury and made albums. Yet they were all returning after the programme on the sleeper for their day jobs. They just seemed to enjoy themselves preserving their folkloric tradition.

In a different vein, whilst on a tour of the Eden Project, the guide told the story of how someone who worked there once was a session musician and he said he knew some guys that might play some medieval music for a concert there.

These tour under the name The Bucket Shop Boys but are no less than Mark Knopfler and assorted members of Genesis, Pink Floyd and Queen who how have homes in Cornwall and play pub gigs.

On the quayside of Fowey stands a British Legion Club. Two young lads entered with a more elderly man some years ago. Thy said that they would like to watch on their TV a rugby international taking place in the World Cup in South Africa. Yes but you would need a temporary membership of £2. Even under their baseball caps the barmaid recognised the faces of Princes Harry and William. No photos were taken and they watched the game in peace.

After university, Michael spent twelve years working for MELODY MAKER before going freelance. He claims to keep doing it because it is all he knows. More Posts