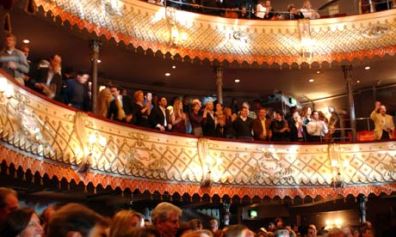 About fifteen years ago, I used to play golf regularly with a chap that I knew was interested in the arts – he and his wife were frequent visits to art galleries, the opera and (I thought) the theatre.

One day I mentioned that I was shortly to make a rare excursion into the West End to see a play featuring Felicity Kendall. I was taken by surprise when he reacted, almost in passing, by announcing that he no longer bothered with West End theatre.

I pressed him as to why.

He cited the exceptionally poor value for money of a West End theatre experience. The seats were too small. There was a crush even to get to the bar to retrieve the half-time drinks you had ordered. The ice creams were tiny and excessively pricey. Once you took into account the costs of travelling, the tickets, drinks and other expenses (not least a meal for two), you’d be lucky to get change from £200 for an evening out which – in his experience, over a course of time – was, as often as not, disappointing (and/or just ordinary) as regards the fare being offered on stage which, after all, was what it was supposed to be all about.

He still sought out and attended ‘fringe’ theatre productions, but had made a strategic decision never to go ‘up town’ about five years before.

I considered all this for a couple of weeks. Thinking back over my own infrequent West End outings to the theatre, I decided he was absolutely right. I’d been vaguely conscious myself of the West End’s poor value for money, but had not taken that the extra logical step of ‘voting with me feet’ and ceasing to go. Attending the West End theatre was something that people of discernment and refinement – like me – just ‘did’, almost out of habit and/or the desire to be seen to be going. It was a way of spending an evening that was more ‘edifying’ than sitting at home watching television.  Most telling of all, reviewing the West End shows I’d seen over the previous period – and recalling some of them at all was harder than you might think –  I found I could count on one hand the number of times I’d had my socks blown off by the brilliance of the staging and acting performances.

By the same token, I was also able to recall many hours of sitting, slightly bored and/or near-comatose, in a darkened West End theatre thinking how much I would be prepared to give in order to be tele-ported straight home to my favourite armchair and/or bed.

I’m an impressionable bloke, me. Within in a month after hearing of my pal’s decision – and the reasons for it – I made one of my own.

I haven’t been to a West End theatre since.

In which context, I thought I’d share with you this morning this article that I spotted on the website of The Independent – THE COST OF THEATRE

After university, Miles Piper began his career on a local newspaper in Wolverhampton and has since worked for a number of national newspapers and magazines. He has also worked as a guest presenter on Classic FM. He was a founder-member of the National Rust board. More Posts