The Musee des Beaux Arts is a handsome building not far from the Negresco. Unlike the other well known museums in this region if reflects more the artists that made Nice their home. 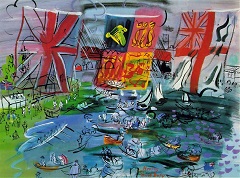 Two of the most famous Raoul Dufy and Henri Matisse were well exhibited here.

Both were born in the north west of France, moved to Paris and once they acquired fame and fortune were attracted to the warmth and light of the south.

Dufy was a keen painter of sport and there is colourful depiction of Henley Regatta.

Both he and Picasso were ceramicists and I particularly enjoyed two nude bodies moulded into a vase by the Spanish genius who made his home in nearby Vallauris.

I like to think that if it was unknown it would still be regarded as one of the finest exhibits on view.

It was raining cats and dogs and many bedraggled tourist clearly decided this visit was the best thing to do on a wet day in Nice.

Sadly many of the exhibits were not on view because of renovation but I was happiest in the one room with a sumptuous oil by Eugene Boudin, the numerous Dufys, two Matisses and the ceramics.

A graduate of the Slade, Alice has painted and written about art all her life. With her children now having now grown up and departed the nest, she recently took up sculpture. More Posts