My missus Doris enjoys sixties music tribute nights. She was thrilled to meet a disc jockey of that era who presents a show on 60s music currently undergoing a national tour. The nearest theatre to us was at Wimborne so she duly bought tickets for last Saturday. I was not wholly disappointed when the show was cancelled as it freed me up for the last two rounds of the US Open and the ICC Trophy.

I began to wish I was boogying to Billy J Kramer and the Dakotas as I had a betting meltdown. To start with the Open. My two favourites missed the cut by some distance, Dustin Johnson and Jon Rahm. With Kevin Chappell and Branden Grace my only surviving picks I had a tickle on Matsuyama who finished second and Ricky Fowler and the eventual winner Brooks Koepka.

Leaving aside my betting for a moment was it an enjoyable tourney for the viewer? In my view no. By having a course of such length it was bound to be slow when the trend is to hurry things up. I also looked for a fitter young golfer for the final rounds though roly poly Charley Hoffman who sweats like a pig and pitches like a prince had an excellent tournament. But it was the healthier looking stripling Brooks Koepka who took the laurels. The tourney will probably be remembered for the 63 of Justin Thomas and his two 3 woods of 300 yards for an eagle. I doubt if the US Open will be returning to Erin Hills. 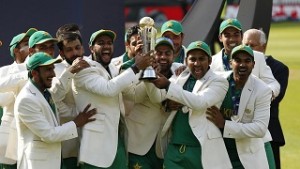 The ICC final exemplified one of my sporting theories namely the best team does not win World competitions. Further one team normally get off the block first and best but it’s another that wins. Either India or England looked the strongest but both fell to mercurial Pakistan. This came as blow as I had backed India from the outset at 9-2. I am sure I was not alone in laughing at the pronunciation of Fakhar . He was man of the match and his name much mentioned. It reminded me of Sidney James in a Carry On Up The Khyber who caused much mirth with “fakir off.”