The other day a good friend told me he knew someone living on his own who derived much pleasure from Cary Grant films.

For me the king of Romantic Comedy was at his peak with Alfred Hitchcock directing him in films like To Catch a Thief and North By Northwest.

Yesterday in that fallow period of late Sunday afternoon North by Northwest was shown on the telly and I started to watch it wondering if it would pass the Rosen test of a classic – namely you start watching it for 5 minutes knowing the story but you become hooked and see it through.

In many ways the story resembles The Thirty Nine Steps: the hero is innocent but cannot convince the authorities, or his loved one, of this.

A train journey features in it as in The Thirty Nine Steps and The Lady Vanishes. 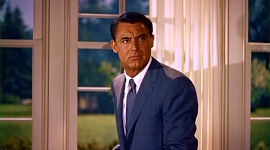 There’s the archetypal Hitchcock icy blonde (Eva Maria Saint) the sinister villain (James Mason) but there is also the suit.

Cary Grant wears the same suit, a blue one tailored by Kilgour French and Steanbury of Savile Row, throughout the movie except when it is dry cleaned in the Hotel Ambassador, Chicago.

The is the film is also known for 2 magnificent scenes of outdoor photography: the attack on Cary Grant by the seed-spraying cropper plane and the final scene on Mount Rushmore.

Before one movie buff picks me up for an error, the scene in the United Nations was not filmed there but on set.

I must also mention the superb film score of Bernard Herrmann.

Cary Grant dominates the film whether he is wisecracking with his mother, well played by Jessica Landis, Eve Kendall (Eva Maria Saint), or the villains. however Hitchcock wanted James Stewart initially for the role.

Cary Grant’s fine looks mean he can play the romantic but his acting ability shows with his puzzled “how-did-I-get into-this expression?”.

Perhaps the final play-out sequence on Mount Rushmore is too long but I thoroughly enjoyed the film from start to finish.

Neil went to the City of London School and Manchester University graduating with a 1st in economics. After a brief stint in accountancy, Neil emigrated to a kibbutz In Israel. His articles on the burgeoning Israeli film industry earned comparisons to Truffaut and Godard in Cahiers du Cinema. Now one of the world's leading film critics and moderators at film Festivals Neil has written definitively in his book Kosher Nostra on Jewish post war actors. Neil lives with his family in North London. More Posts