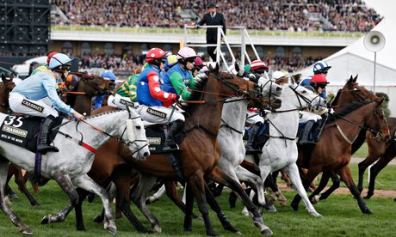 I can claim acquaintanceship with two of the key personalities of this year’s Grand National. The first is Lord Daresbury, effectively Lord Grand National. He was at the same college as me at Cambridge although I did not know him well.  He was Peter Greenall then, the heir of the brewery Greenall Whitney. My college had a number of brewery families that conformed with its drinking image. Peter Greenall I recall taking a whole year off to ride horses competitively. He recently gave a interview in which he mentioned how he raised the profile of the race, now in competition withe Gold Cup, increased the prize money to six figures and found sponsors, but he did not touch on one of the principal concerns, the number of horses that have died on those high fences.

The second was the owner of the winner, Pineau de Re – Dr Richard Newland – whom I met at Windsor evening races.

He was a most convivial fellow and friend of a good friend of mine, Rob, himself an owner and sports enthusiast.

I meet Rob for a reunion lunch every three months and always ask  after Richard. He said he was outperforming the bigger names, the Nicholls and Hendersons, in terms of the size of his yard.

One of the attractions of National Hunt is that its not the preserve of the mega rich but a entrepreneurial doctor can train a winner.

One of the unsatisfactory aspects of it is the sloppiness of the start.

This has led to pure farce. It’s beyond me why they cannot get them into starting gate as they do on the flat . Once again this had led  to controversy with the jockeys in open revolt against the stewards. Aside from this, the Grand National, unlike say the Derby, or indeed the rather slick Boat Race that has moved along way from the Edwardian amateurism of gilded youth, has maintained its exalted status in the sporting calendar and both my acquaintances can claim some responsibility for that.

Tom Hollingsworth is a former deputy sports editor of the Daily Express. For many years he worked in a sports agency, representing mainly football players and motor racing drivers. Tom holds a private pilot’s licence and flying is his principal recreation. More Posts