Let us be blunt about it. Few rugby fans will be drawing conclusions about the outcome of this year’s Rugby World Cup if, like me, they watched the Northern Hemisphere warm-up games between Ireland and Italy (29-10 in Dublin) and England v Wales (33-19 at Twickenham) on television over the weekend against the background of the Australian defeat of the All Blacks (47-26 in Perth) in the Bledisloe Cup.

Inevitably injuries were among the headlines.

The Ireland/Italy clash was a classic meaningless and lacklustre encounter – a second string home team won in front of a barely half-full Aviva Stadium with promising back-up fly half Joey Carbery picking up a potentially serious leg injury that could have material implications for their progress in Japan. 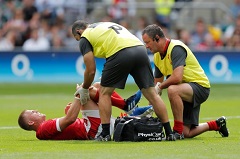 These things happen, of course, but with hindsight one has to question the wisdom of the home nations taking on as many ‘warm up’ games as they have – the England and Wales return match in Cardiff is only six days away.

The one full-on game – in which the Aussies notched their highest-ever points total against New Zealand – seems to have confirmed the impression that the All Blacks are in trouble.

The Scott Barrett sending-off didn’t help their cause but, make no mistake, they came off distinctly second-best in the dynamism stakes. They were outplayed across the park.

I’m not writing them off completely regarding the RWC because – as you’d expect – a hurting All Black team is a dangerous one and playing at home next weekend in the return fixture they could be a very different proposition.

Yet it is to the match a Twickenham that I now wish to return.

One never knows what mind games are going on when wily operators like Warren Gatland and Eddie Jones are involved. 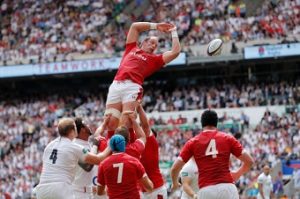 On the face of it the narrative is that the former was taking things seriously.

If they’d won, Wales would not only have extended their unbeaten run to 15 but wrestled the world ranking number one slot from the Kiwis.

Gatts had picked something very close to his best team and arguably he was going for continued momentum after the Six Nations Grand Slam plus a welcome psychological edge over England.

Meanwhile Jones – to borrow from the current state of UK politics for a moment, rugby’s nearest equivalent to Dominic Cummings – had been ploughing his unconventional furrow by picking a mix and match squad devoid of at least eight of his key first choice players.

What was the thinking behind the move? Had he anticipated that Wales would be at full-strength and decided to throw in a combination of second-string and fringe (young) players just to see how they could do, on the win-win basis that if they held their own (or better) he could claim a success and – if they got thrashed – he could hide behind the excuses that at least he’d given everybody a chance to show what they could do … and the result didn’t matter anyway?

In the end, of course, things went particularly well for the home team. They came out well fired-up, controlled the first twenty minutes and got the Twickenham crowd right behind them.

Wales are a top team as their world ranking testifies and were always going to work their way into the contest – besides their well-honed coaching team they have some serious leaders on the pitch – and the middle forty minutes of the clash was a ding-dong affair, swinging first one way and then the other, before England’s game management finally took them home. The scoreline flatters them – with fifteen minutes to no-side the outcome could quite easily have been different.

To conclude I am going to comment upon the home team’s performance because that is my brief. 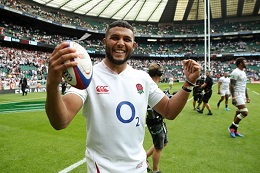 Despite Billy Vunipola’s man of the match award, the stand-out England player for me was Lewis Ludlam, the Northampton bind-side forward, whom previously I had never seen operating in the flesh.

Word had it that this fringe player had been impressing in camp and on yesterday’s evidence I can see a strong case for him being included when Eddie Jones announces his RWC squad at 1.00pm today.

Big, combative, high work rate, never a backward step … what’s not to like?

Yet worries for me include Elliot Daly.

He’s probably the best all-round footballer in Britain and therefore arguably he should be a first team choice somewhere, but for me not where Jones is currently using him – at full back. His defence, both under the high ball and in tackling, is a weakness though this comment is relative.

Discarded Mike Brown doesn’t have 50% of Daly’s creativity (and I’m not recommending his selection for Japan) but he’s rock-solid at both. And the just-returned-from-long-term-injury Anthony Watson also did enough yesterday on the wing to demonstrate that he’s superior to Daly in these departments of the game. This issue is something that Jones needs to address.

The feeblest aspect of England’s game yesterday was indeed defence generally. On the front foot – that is, if you can use the term “front foot” in the context of defence at all(!) – England’s rush defence was excellent, repeatedly giving Wales “the hurry up” in the first half.

But when the game broke up a bit and Wales began applying free-flowing pressure, too often England were disorganised and porous.

Quite how Wales scrum half Gareth Davies was allowed to break from a scrum on the halfway line and run fifty metres to score a try, in the process evading three blatant missed tackles, including one by last line of defence Daly, I shall never know.

So yes, in the circumstances a very pleasing victory against the odds for England but their card should be marked with “must do better” in defence – and also to an extent when it comes to discipline.

At one point the home team conceded five consecutive penalties in a row in the second half, though since – when the Sky Sports camera momentarily switched to the England head coach during this period – I saw him throw down his pencil in frustration, I suspect he doesn’t need a reminder on the subject from me.