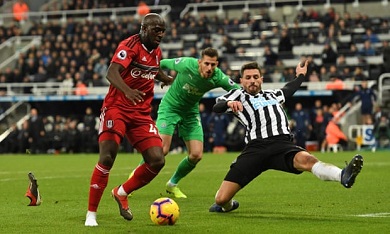 A goalless draw is rarely an occasion to celebrate but it is when it’s your first clean sheet of the season so we were all delighted that the boys returned from Newcastle with a point and no goals conceded.

Not that our defence was totally secure. In coming out for a cross that was clearly Alfie Mawson’s, keeper Sergio Rico’s fists all but knocked out his central defender; Newcastle might have had a penalty and their excellent defender Lascelles had a free header at a corner.

The 5 at the back of Fulham worked better. Dennis Odoi who is not secure at right back or in the centre of a four looked more comfortable in a back three. Crucially the opposition did not find space so easy to find in our box.

Newcastle were restricted in their chances. Of course this comes at a price and as the system is more watertight so the goal opportunities lessen.

Callum Chambers for example in screening the defence no longer gets as far forward to generate chances on goals.

I predict that our next two key home games against Wolves on Boxing Day and Huddersfield next Saturday will be low scoring affairs.

Fulham had their chances too and in a poor game justifying its last billing on Match of the Day we were denied a penalty in a late melee.

The return of Ryan Sessegnon as goalscorer is imperative. He announced his presence with two goals at St James three seasons ago.

We need his lethal finishing at pace. It’s goalscoring that separates Fulham from the other three present relegation contenders: Burnley, Cardiff and Huddersfield.

When John Pargiter called for some tips I advised him to bet against Newcastle. Fulham have a good record at St James, last winning there comfortably 3-1 in Newcastle ‘s promotion season from the Championship.

Older fans will recall a brilliant 4-1 win in the early eighties over a Newcastle team containing Kevin Keegan and Chris Waddle.

A young lad called Ray Houghton scored for us with a 35 yard lob. Whatever happened to him?

The next few games may well define Fulham‘s season.